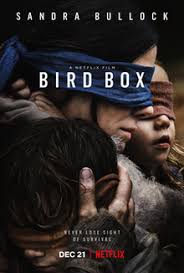 The birds need to be kept in the box…

I love movies.  It’s that simple.  On the other hand, there are two main things about some movies that I absolutely cannot tolerate.  One of those being how predictable some movies can be.  When you watch a movie for the first time, you want to enjoy and take in all aspects of what you are experiencing.  Not guess the next scene.

Here let me provide a classic example: the ending to Romeo and Juliet.  It may have been difficult to see the end of such a complicated play… if only we weren’t told how it would end IN THE PROLOGUE.

Another quality some movies have that I don’t like?  Watching all the action in the first thirty minutes, only to be snoozing by the ending.  If I can’t keep my eyes open through the whole thing, something is wrong in my opinion.

With these two terrible qualities in mind, Bird Box had them both.  Charlie (Lil Rel Howery) dying after being tied to a chair left to stare directly at the entity?  Predictable.  Jessica (Sarah Paulson) leaving her sister Malorie to fend for herself after being killed?  Predictable.   Malorie and the kids eventually making it to the other side after encountering a few obstacles?  Yeah…predictable.

I will say I enjoyed the first half of the movie.  I think.  We were introduced to most of the characters, a lot of action took place as everyone piled inside Charlie’s house, tons of anger and hatred created the good kind of drama and we got to somewhat understand what was taking place.

Towards the second half, I lost my interest.  Once I lost sight of most characters, it did get a little boring.  Knowing that Malorie and her kids weren’t going to make it to the other side of the water without some sort of attack was definitely the driving force behind my lack of interest.

While it was predictable to see Malorie and her kids arrive at the other side of the river, I did not see the blind school coming.  That was a very clever addition to the ending of the movie and I will give the director and screenwriters a gold star for that one.

Don’t get me wrong, we all love Sandra Bullock.  Hands down.  Her character Malorie and her eventual love interest, Tom, seemed to be the only reasonable characters in the movie.  All the others were quite ignorant and if I’m being honest, annoying too.

I guess the annoying characters are present in any movie you watch.  This one was just the icing on top of the cake.  Felix (Colson Baker) attempting to get with Lucy (Rosa Salazar) in an apocalyptic setting?  Yeah…not cute.

While I am giving my brutally honest opinion about the movie, I can’t completely trash it.  The acting wasn’t a total let down…for the most part.

In most movies that I watch and end up not taking a liking to, the actors try too hard to imitate how they believe their characters should behave.  They never truly embody the character.  That was different for this movie.

Take Colson Baker for example.  He embodied Felix’s character and put on an amazing performance in the movie.  Not many people would know that he is in fact an American rapper who goes by the name, “Machine Gun Kelly.”  Well except me.  I knew that.  But who would of thought a rapper could act so well in this movie?

I will say this is a unique cast, I will give everyone involved with the making of this movie credit for the acting.  I will not give them credit for the lack of action throughout its entirety, the annoying characters, the soap opera-like graphics, the confusing story line and the predictable scenes.

I personally don’t feel drawn to see this movie again.  It was just not captivating enough to really reel me to watch a second time.  It was hard to even get through the first time.

If you want to watch the product of “A Quiet Place”, “The Happening”, “The Walking Dead” and “The Birds” all put together, be my guest.  You won’t catch me nestled in my bed watching it on Netflix ever again.

The Rooster • Copyright 2020 • FLEX WordPress Theme by SNO • Log in