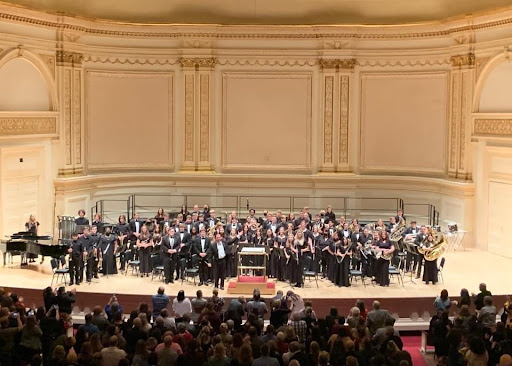 Reagan’s musicians stand after their performance at Carnegie Hall. Reagan’s wind, jazz, orchestral, and ensemble bands performed at the historic venue for a high school showcase put on by “Manhattan Concert Productions.”

In the beginning of April, the Raiders Jazz, Wind, Orchestral, and Ensemble bands had the opportunity to play in arguably the most famous concert hall in the United States of America: Carnegie Hall in New York City. The bands were able to play in front of up to 3,600 people to the best of their ability and put a prestigious reputation to Reagan’s musical abilities.

Earlier in the year, band director Robert Johnston received an opportunity to participate in a showcase of high school bands taking place at Carnegie Hall.

“I was ecstatic to discover the opportunity to play in Carnegie Hall,” Johnson said. “To be able to play at a place like that is huge and once in a lifetime.”

Reagan participated among other high school bands in the nation in a showcase of each band’s skill where they worked with one another to show off their talents in music.

“We played in an All-American band performance at Carnegie, it was set up by a program called ‘Manhattan Concert Productions.’” said junior Garrett Sapp. “We were all really excited to learn this after Mr. Johnson signed us up.”

From April 1 to April 5, the Raiders went to New York to experience the city and perform.

“When we weren’t practicing or performing, we were really able to take in the city.” said junior Lily Jones. “It was a great experience for all of us who haven’t been to New York, and those who have got the chance to return.”

On Monday, April 4, the Raiders were sent to the hall to perform.

“The place was beautiful,” said senior Tyler Ward. “It was enormous, and had around 3,000 seats. There were some really old musical equipment in there such as this one piano, which is priceless. It’s a great representation of how old and grand the place really is.”

During their performance, the Raiders played three pieces, one of which was the New York Premiere piece of “Beyond the Gates” by composer Julie Giroux.

Giroux is an American composer who has worked on symphonic orchestral productions, and has been involved with the composition of film soundtracks such as the 1992 film “White Men Can’t Jump.”

Although only a short time was spent at Carnegie Hall, the performance could mean many more opportunities for band students.

“The performance could open some real opportunities to the people who participated.” Ward said. “The seniors have already been accepted to their schools, but for juniors, sophomores, and freshmen, being able to put a Carnegie Hall performance on their resume would be great for the ones who want to go to school for music. Acceptance boards would eat that up.”

The bands’ performances in New York City certainly will continue to build Reagan’s musical reputation.. Not only will it benefit the individuals’ abilities for opportunities outside of high school, but it  will help them become a better group overall and play better while they’re still together.

“This was an amazing opportunity,” Jones said. “I think this performance will really help strengthen our already strong group, and help us be the best we can be.”