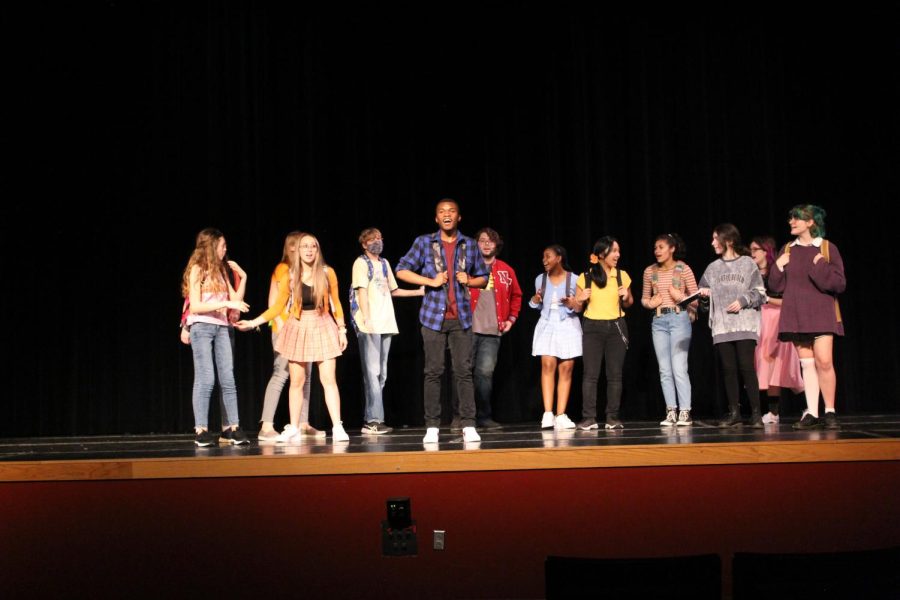 Sophomore Haikem Southerland, who plays Adam, sings “I’ve Got This.” Since COVID-19 shut down Reagan’s last musical, “Freaky Friday” was many students' first opportunity to perform.

Reagan’s drama department successfully performed “Freaky Friday” at the end of March. It was the first musical performed at Reagan since 2019.

“Freaky Friday” follows fast-paced mother Katherine and laid-back daughter Ellie as they navigate each other’s lives for a day. Both have their own secrets and schedules to keep. Ellie wants to participate in the hunt, and get closer to Adam. Adam oversees the hunt, a popular school-wide scavenger hunt. Katherine stresses about her upcoming wedding to Mike, while juggling a magazine interview and her unconventional son Fletcher.

“The Sound of Music” was the last musical production performed at Reagan. Since then, two plays, “Alice in Wonderland” and “Noises Off,” have been performed for live audiences at Reagan.

“Alice in Wonderland” was performed outdoors in April 2021, the first live play that Reagan performed since schools were forced to go virtual in 2020.

“I definitely would’ve had a musical last year, had there been an opportunity,” director Jenn Janus said. “We were the only school in the county who performed in front of a live audience last year, so just doing a show in general was an accomplishment.”

Traditionally, Reagan performs a fall play and a spring musical. The last musical that was supposed to be performed was “Shrek: The Musical.” However, since production was interrupted, Reagan audiences never got to see it.

“We tried to put on ‘Shrek,’ but it got interrupted by COVID-19,” junior Samantha Medrano, who played Katherine, said. “I am so happy that we finally got to perform a musical, especially ‘Freaky Friday’ because it has been pushed back multiple times.”

Due to delays in performances, many students haven’t had as many opportunities to perform through the theatre department. Only current seniors would have had the chance to be a part of the last musical.

“That was my freshman year, and I would say that the environment has changed, but for the better,” senior Sam McInturff, who played Ellie, said. “‘Sound of Music’ was really stressful as it was my first musical, but I was able to become better friends with the cast during ‘Freaky Friday.’ I think everyone was really happy to be able to do an in person musical again.”

Differences in grade levels didn’t prevent the cast from quickly becoming friends. The Drama Club began a mentorship program this year so that underclassmen could learn from more experienced students.

“I quickly found a community within the cast,” junior Meredith Hobbs, who played Grandma Helene, said. “Everyone there was so welcoming and kind, it was amazing to be a part of.”

Participation in performances wasn’t a worry for Janus this year. The cast and crew working on “Freaky Friday” totalled 54 people. With all of the additional help, the theatre department was able to successfully put on a show.

“Last year we performed out in the bus parking lot, and it meant a lot of moving the set back and forth,” sophomore Jailynn Flowers, an ensemble member, said. “It was a lot of fun and a bit less stressful this year since we were inside.”

This year’s musical had other differences compared to past performances.

“This year we went with performance tracks just to save a little money, and also with COVID-19 and everything, trying to keep people safe breathing-wise,” Janus said. “The timings [of the songs] were different, so where we could’ve had the orchestra slow things down, we didn’t have that option. So we had to adjust to the track as opposed to the track adjusting to us.”

Despite the differences in procedures and differences resulting from COVID-19, the experience was another step back to normal for the theatre department.

“Even though this was my first production and musical, I do feel like I’ve grown a great appreciation for the craft and spirit of performing arts because of this experience,” sophomore Haikem Southerland, who played Adam, said. “Having the privilege of being behind the scenes and seeing the amount of work, patience, and love that goes into it was very surreal.”