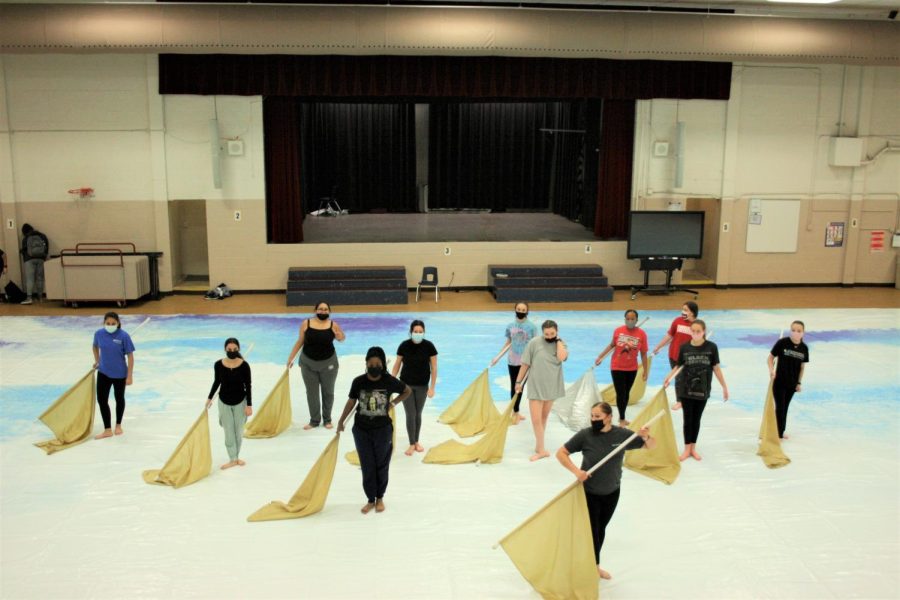 The Reagan winterguard stands together in their routine's final pose during a practice. The winterguard won their most recent competition despite beginning practices late in the season.

The Reagan winterguard is set to compete twice in March under the direction of new coach, Tuck Tucker, who began coaching the team in late January. Tucker coached for Reagan a total of seven years. In recent years he has coached the Atkins winterguard.

“Reagan hasn’t had a regular winterguard season in a few years,” assistant coach Hailey Batts said. “This is my first year with Reagan; Tuck has been with Reagan in the past.”

Reagan’s previous guard instructor, Jeff Brown, stepped down this season. He coached the Reagan guard for 12 years. Since Brown’s departure occurred with little notice, and there are quickly upcoming competitions, mixed emotions are felt throughout the team.

“I do wish Jeff had stayed through the winterguard season so that we could’ve started on time and had more preparation,” sophomore Jala Daye said. “Tuck is doing really well at teaching us a lot in so little time, but it seems like it’s kind of a group project because he’s bringing in at least four extra people to help guide us.”

The winterguard recently won the Winter Blast competition on March 5, scoring 81.84. The team has been promoted to category one, so they will compete against larger and more experienced teams.

“It’s a great feeling to see all of our hard work and dedication pay off,” senior Hannah Rash, captain of Reagan’s winterguard, said. “It’s exciting to see what we can accomplish in the next class.”

Traditionally, the winterguard season begins in early to mid November. As a result of the coaching change, practice began in January 2022. Guard members as well as leadership are stressed about the upcoming competitions. Many students are nervous about competing so soon.

“Starting so late gave us a very short amount of time to learn our routine along with the drill, which is stressful and hard,” junior Vivian De Los Santos said.

Each individual guard member grapples with improving their technique so that the group looks more cohesive as a whole. With only about two minutes to impress the judges, each member has to perform at their fullest capacity.

“There seems to be a lot more parts to winterguard than color guard,” Daye said. “It makes the memorization harder even though the performance time is shorter.”

Team bonding has not been an obstacle for the guard. Everyone on the team was required to participate in the fall guard, so friendships have already been formed.

“I think already being friends helps because they understand how you work,” freshman Emma Claire Thompson said. “They can help you when you need help on movements or other flag work.”

Despite difficulties in the beginning of the season, the team is ready and willing to put in the extra hours of hard work to become competition ready.

“The routine hasn’t necessarily been affected, they just have to learn everything so much faster,” Batts said. “But I feel like everyone’s really pulled through to try to make up for the time that we did lose.”

The winterguard’s next competition will be on March 19. They have a showcase on March 22 at 6:30 p.m. at Pfafftown’s Vienna Elementary School gym.