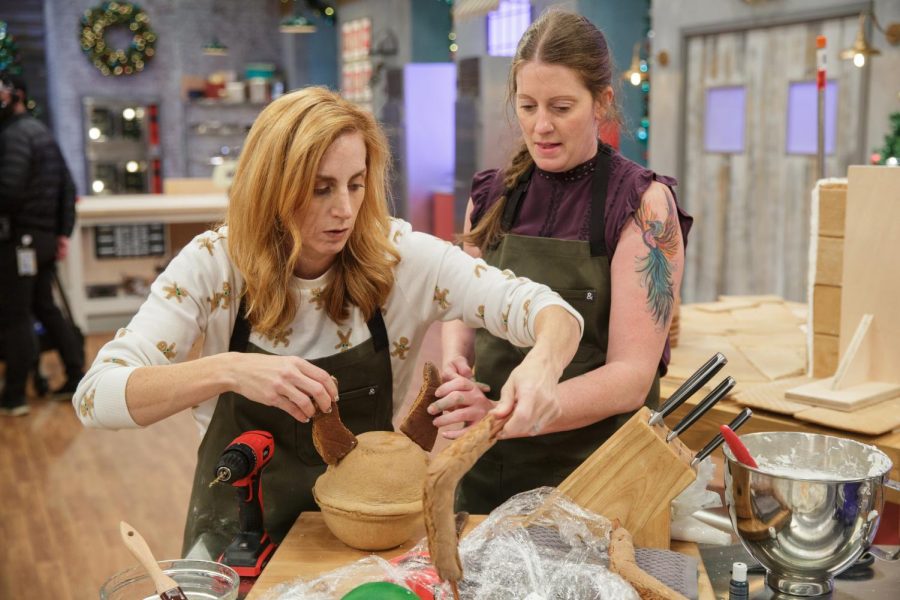 photo courtesy of the Food Network

Episode 4 of the Food Network’s “Holiday Baking Championship: Gingerbread Showdown,” airing Nov. 22, will feature two competitors local to Winston-Salem. Lindsay Deibler and Stacey Milner teamed up to bake-off against the competition and potentially win the grand prize of $10,000.

Milner is the owner of Baked Just SO bakery here in Winston-Salem, which she founded in 2017. A second location of the much-loved bakery opened this past February in Lewisville.

Deibler is a gingerbread genius who creates beautiful pieces for displays and competitions. She is also a Reagan parent.

“Lindsay and I met on a playground like 12 to 15 years ago,” Milner said. “We’ve always had a side joke about working together someday… It really started when I first opened the bakery and she came in and she’s like ‘We’re going to get on the Food Network!’”

Back then, appearing on the Food Network was just a dream. Now, it’s a reality.

“I got the call that they were doing a gingerbread show and that I needed a baker as my partner,” Deibler said, having gone through the process to earn a spot on the episode. “Stacey had two minutes to answer yes, and the Food Network called her.”

Surprisingly, Milner had never worked with gingerbread before.

“Lindsay is the creator and the mastermind behind all the gingerbread. I just did what she said,” Milner said.

The episode was filmed this past summer, and to keep it confidential, both Deibler and Milner had to lie to family and friends about where they were going.

“We had to keep it a secret for a really really long time,” Deibler said. “My mother-in-law thought I went to Florida. I had to apologize to her, and now nobody believes me when I say that I’m going to Florida.”

Teams were given time to make certain things for their project at home before the show, but nothing could be built. Pieces had to be constructed on the show using the show’s kitchen tools.

“You know where everything is in your kitchen, but trying to figure out where a spoon is… is sometimes hard,” Deibler said, remembering all the times she asked where something was.

“That was extremely challenging when it came to baking, trying to find the things I need quickly with my brain already on TV,” Milner said.

As if finding a measuring cup was hard, making the gingerbread art piece requires lots of patience and dedication.

“The lady that won [the National Gingerbread Competition] last year started her piece in February. For November,” said Deibler, giving a time frame for about how long a gingerbread project takes to complete.

Milner and Deibler were also being followed around by a film crew while racing against time to complete their piece.

“I definitely went through an adjustment period when I got there. It’s kinda funny- you have these men in your face with a camera all the time while we’re moving around,” Milner said. “It’s kinda funny half the time, and part of the time you’re like, ‘get out of my way!’”

Deibler’s nerves came from the appearance of the judges.

“I think I freaked out when the host and judges came around,” Deibler said.

Jesse Palmer hosted the show, with the judges being Nacho Aguirre, Kardea Brown, and Breegan Jane.

After filming the show, Deibler felt like she needed to relax having felt many emotions during the competition. Milner took away some confidence from the experience having completed the challenge they were given.

When asked if they would do it again, both responded with a resounding “yes.”

“We work really well together I think, and where I was crumbling, Lindsay was sweeping it up,” Milner said.

Both Milner and Deibler are still in awe of the experience.

“What’s the percentage of people on the planet that can say that they were on the Food Network,” Deibler said, reflecting on her experience. “I can’t wait to see it.”

Be sure to tune into the Food Network on Nov. 22 at 9 p.m. ET to watch Milner and Deibler compete in the “Holiday Baking Championship: Gingerbread Showdown.”