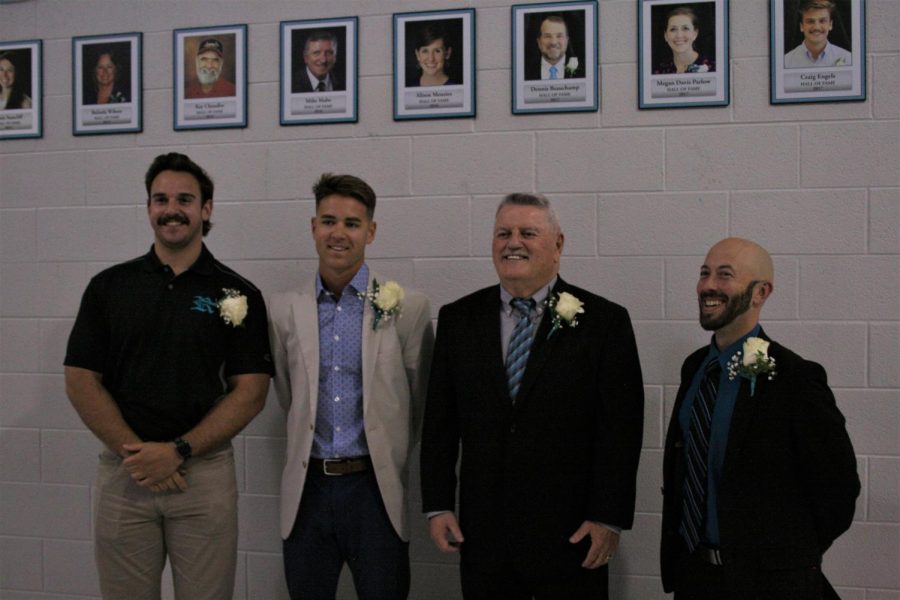 Four out of the five 2021-2022 Hall of Fame inductees. Recognized for their dedication and improvement for Reagan

The Hall of Fame is a banquet to honor those who have served and improved various programs at Reagan. This year’s introduction banquet was held at Reagan on Oct. 22, 2021, with inductees introduced at halftime of the football game that night.

Former volunteer Tammy Darden was nominated by Melissa Maltba for her service in multiple roles for Meadowlark Elementary and Middle Schools and Reagan for nearly two decades. Highlighted accomplishments include:

Worked with the PTAs of Meadowlark Elementary and Middle Schools and Reagan
Served in many leadership roles and numerous officer positions including Vice President and President
In 2018, launched a program to serve monthly meals to teachers and staff at a Title 1 school
Served as a parent representative on committees covering the entire WS/FCS, speaking up for the interest of all students.

Former student Tanner Poindexter was nominated by football coach Josh McGee for his achievements as the most efficient offensive lineman in program history, as well as for his dedication and excellence both on and off the field. Highlighted accomplishments include:

Former staff member Howard West was nominated by Jeff Overby for his  accomplishments while serving as the school’s first athletic director and coach for the men’s varsity basketball team. Highlighted accomplishments include:

The banquet was attended by the family and friends of the inductees and the Hall of Fame committee members, which include Lori Blackman, Tricia Blankenbaker, Amber Bryant, Susan Buchanan, Katie Grubbs and Brad Royal.

Inductee’s plaques with the past years’ inductees on the Hall of Fame wall in front of the main office.