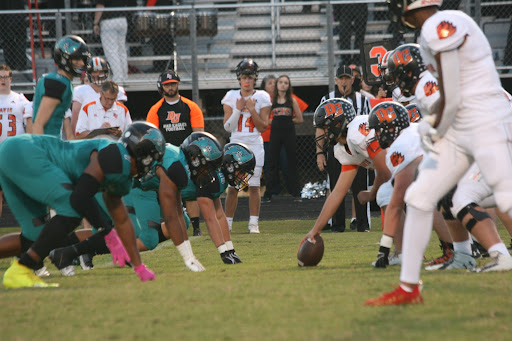 The Reagan Raiders and the Davie War Eagles line up for a play at the Reagan homecoming game on Friday Sept. 17. The Raiders would go on to win 56-14.

After an unusual year of heavy schedule complications, the Reagan Raiders varsity football team is in the midst of their fall season. Although the sports setting seems to be back to normal for the rest of the student body, there is one big change for the football team.

This year, the Raiders have faced a new set of schools that were noticeably higher ranked than their usual opponents.

Instead of a season composed of solely local games, the Raiders have been playing higher ranked football teams in the state from cities further away, such as the Friday, Sept. 3 game against Myers Park in Charlotte.

“This is our toughest schedule our team has ever had,” said head football coach, Josh McGee.

The 2021-22 football schedule is definitely a tough one. Four of their opponent schools are in the top 10 football teams in the state during the 2021 season: Glenn, Myers Park, East Forsyth and Grimsley.

The players on the football team definitely recognized the significance of the new season’s higher-tier opponents.

“We’re gonna have our fair share of harder teams this year,” said junior long snapper Mason Mitchener. “We’re gonna have to step up our game for this season if we’re gonna be able to compete with the other teams.”

Michener is not the only player who believes that they need to practice harder.

“These new teams are definitely better than our usual teams,” said junior linebacker Micah Hollingsworth. “Me personally, I’m definitely gonna be preparing harder than usual for these games. These new guys are kinda tough.”

“This scheduling was very intentional,” McGee said. “This schedule is the toughest our team has ever faced. For our program to take the next step, we must play good teams.”

Reagan football plays in the 4A Central Piedmont conference. This year, especially to McGee, the focus has been put more on in-conference teams.

“We play in the toughest conference in the state of North Carolina,” McGee said. “It is very easy to go out and schedule non-conference teams that you know you can beat but that doesn’t help the team prepare for our conference.”

McGee wants this year to focus on schools that will push the Raiders to further limits. Playing in the toughest conference in North Carolina means that being the best requires much more work than the other conferences.

“If we can succeed in our conference, the Raiders can definitely go out and beat out-of-conference teams like Grimsley,” McGee said. “It’s all about being able to dominate your own game before going out and taking over others’.”

The Raiders celebrated a major in-conference win against Davie County High School on Friday, Sept. 17, with a final score of 56-14. McGee’s strategy seems to be paying off, as the Raiders start taking over the 4A Central Piedmont Conference.

The coaching staff wants the Raiders to play harder to rise up in the ranks against their competitors. McGee really wants the team to test the team’s strengths and weaknesses, and push them further than they thought they could go.

“Hopefully by playing these teams and competing with them, our team learns to handle adversity and learns that we can play with anyone,” McGee said.

Coach McGee and the rest of the coaching staff know that this year’s schedule will definitely test the Raiders. Although this new group of teams will push the team out of their comfort zone, they know that with the right amount of support, strength, and sportsmanship, the Raiders can top the game.

“If we practice harder and work as a team, we could go all the way,” Hollingsworth said.