Things to know about the Israel-Palestinian struggle 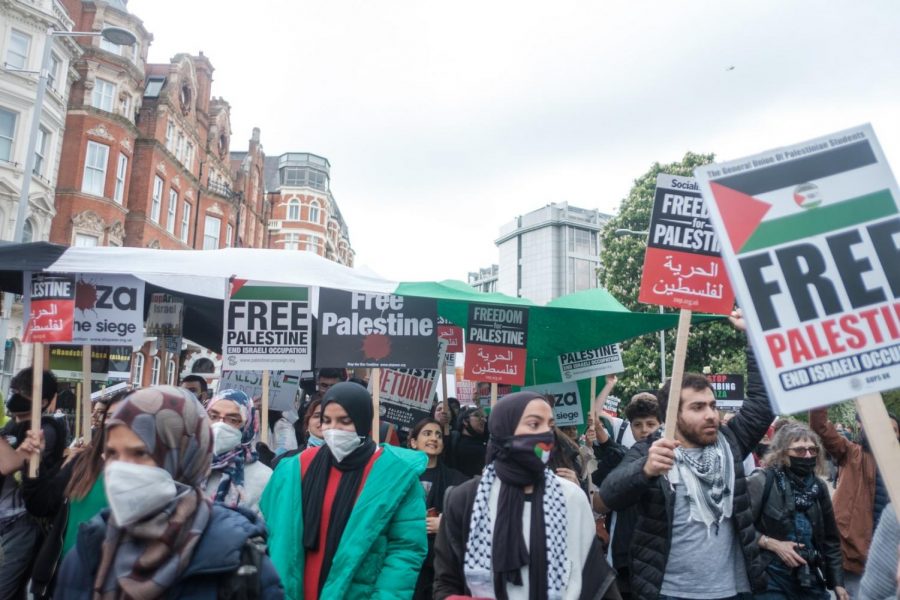 A Palestinian protest with about 150,000 people on May 15, 2021. They were gathered at the Israeli Embassy and were eventually blocked and resisted by police.

The past week there has been some of the most violence across the Israel and Palestine territory since the 2014 war in Gaza. Unrest between Israel and Palestine is not a new development, but the extent of the destruction and brutality happening currently has brought the tension in the region to the forefront of news.

The Israelis and Palestinians have had animosity harbored for years, since the Nakba in 1948 when Palestinians were exodized from their land in order to establish the state of Israel.

The expulsion of these hundreds of thousands of Palestinians was per the desire of the Zionist movement, a nationalist movement with the intention to return the Jewish population to their homeland. The basis of Zionism is that Jews deserve their own state, and historical ties to the Holy Land in Palestine made it their preferred option.

At least 750,000 Palestinians became refugees thanks to Zionist forces, who took away more than 78% of historic Palestine and contributed to the deaths of thousands of Palestinians and the destruction of villages and cities.

The process was backed by the British, who believed by supporting the Zionist movement they could gather support from the Jewish people in the United States and Russia to help them during World War I. They also hoped it could give them more control in Palestine after the war.

Many revolts and uprisings were held by Palestinians against the British due to their support of the Zionists. As issues continued to sprout, the British gave away the project to the United Nations (UN).

This did not quell the fighting, as the Palestinians continued to fight back against the measures taken by the British and now the UN. At the end of World War II, the United States began to back the Zionist cause.

The conflict going on today had several different triggers that have built up into another war. One of the first major events happened on April 13, on the first night of Ramadan and also Memorial Day in Israel.

Prayers were being held at the Al-Aqsa Mosque, though they coincided with a speech being given nearby by the Israeli president, Reuven Rivlin. The mosque leadership was asked not to broadcast their prayers because Israeli officials were worried they would distract from the president’s speech.

The mosque declined, finding the request disrespectful, and in retaliation the Israeli police raided the mosque and disconnected the speakers.

Soon afterwards the Israeli police decided to ban East Jerusalem residents from congregating at a plaza near Damascus Gate and barricaded the area. It was common for young Palestinians to gather there at night during Ramadan, and so they took the action as further incitement and began to hold protests there.

Ultra-nationalist Jews responded with a march of their own, chanting “Death to all Arabs” and carrying out attacks on nearby Palestinians. Later that week, young Palestinians attacked Jews and uploaded videos to social media sites like TikTok, which grew the attention and created even more Jewish retribution.

On April 25, the government once again allowed Palestinians to gather outside Damascus Gate. By then it was too late for the action to repent for the repercussions of closing off the area, and there were still other events escalating the conflict.

For example, in the neighborhood of Sheikh Jarrah, there has been ongoing unease involving Israelis taking over Palestinian homes. The neighborhood is in occupied East Jerusalem, meaning although the land legally belongs to Palestinians, Israelis have been settling there.

One of the instances that had brought more attention to what was happening in Sheikh Jarrah involved a court ruling asking six Palestinian families to leave their homes this May.

Peaceful protests were held throughout April showing support for these six families. The Israeli police arrived to dispel the protests, spraying protestors with skunk water, arresting them, creating fights and breaking into Palestinian homes.

Also recently, the Palestinian president Mahmoud Abbas began getting negative attention after cancelling the upcoming elections due to fear of the results. Because of this, Hamas is trying to assert themselves as a more capable leader for Palestinians.

Hamas is the Palestinian Islamist nationalist group that governs the Gaza Strip, and their motivation is to establish an independent Islamic state in Palestine.

On Friday, May 7, there was another police raid on the Al-Aqsa Mosque. Police came in shortly after 8 p.m. armed with tear gas, stun grenades and rubber bullets, and fought for hours with protestors who threw stones to fight back.

It is reported by medics that hundreds were injured. This occurred on the last Friday of Ramadan, and the violent sight inside a holy space added fuel to the fire.

Palestinians had gathered more stones in the mosque to defend themselves from predicted future clashes with police and extremist Jews, and the mosque was raided by police again on Monday, May 10, armed with the same aggressive gear. Shortly after 6 p.m. rocket fire began from Gaza from the Hamas, and fighting has become much bloodier.

The Israeli military is responding with airstrikes, one of which caused the destruction of a building in Gaza City that housed offices of The Associated Press and some other media outlets on Saturday, May 15. Associated Press employees and freelancers were thankfully able to evacuate the building safely.

On Sunday, May 16, Israel bombed the house of the leader of Hamas in Gaza following Hamas launching over 100 rockets towards Israel. Air strikes, protests, and attacks continue in the Israel and Palestine regions. Diplomats have been meeting to try and discuss a ceasefire.