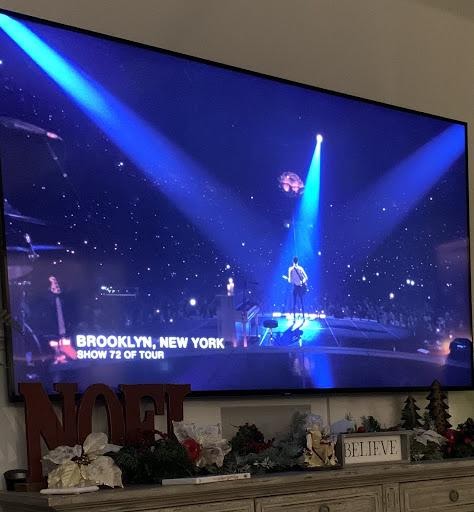 Behind the scenes of Shawn Mendes performing in Brooklyn, New York.

You would think based on his performance on stage that Shawn Mendes has no doubts about his career and loves to perform all the time. While he does thoroughly enjoy the performances, there is a lot more that goes into being a celebrity than people think.

Mendes is a 21-year-old Canadian pop singer and songwriter. Mendes is from Toronto, Canada where his sister Aaliyah Mendes, his father Manuel Mendes and his mother Karen Mendes all live. He and his girlfriend, Camila Cabello, now live in an apartment in New York City.

Cabello is a former member of the girl band “Fifth Harmony.” Mendes and Cabello met when they were both opening acts for Austin Mahone’s concert in 2014. Over the years, their tight friendship turned into the relationship we now know. Now, Mendes confessed that all his songs are about Cabello.

The film really goes in depth about what being an artist is really like. The majority of their time is spent on a tour bus, rarely ever able to be home with their families. During concert times, they have shows every other night, which causes vocal issues as well.

Mendes continuously said that one of the hardest parts about going on tour and being an artist was missing home and his friends and family.

This film shows behind the scenes at some of Mendes performances, and how he prepares. It also gives us a sneak peak of Mendes’ live concerts, and the energy Mendes gives to the crowd. He is a great performer with lots of talent.

Though this film is slightly uneventful, I really recommend it. I’m not the biggest fan of Shawn Mendes, and am more of a country music kind of gal, but I did really enjoy this documentary.

Through all the struggles and hardships of writing, producing and performing, Mendes always decided that he loves it more than anything, and doesn’t plan to stop.

“Maybe I should pretend I’m superman for a little bit longer,” said Mendes.