Masked vigilante works in Winston-Salem to help homeless in need 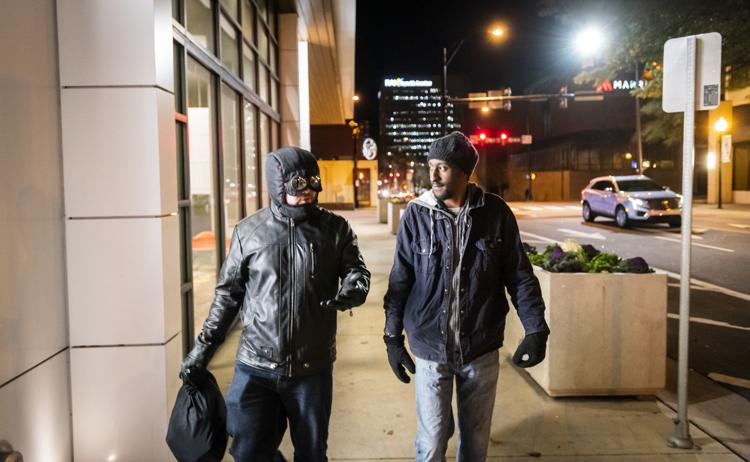 Nick Olsen. otherwise known as "Night Watch" walks with Joshua Temple to a homeless shelter. This is one of the ways he aids the homeless community in downtown Winston-Salem. Photo courtesy of Andrew Dye

A local hero in Winston-Salem patrols the streets at night and helps those in need by providing them with clothing, food and toiletries. Nick Olsen, a 29-year-old volunteer wears a leather helmet with reflective goggles to support his “superhero” identity, and goes by the name Night Watch.

“I’m not looking to be a Batman and go around beating up criminals,” Night Watch said. “That’s not what I do, but you know if I’m going around trying to help people and I come across a situation where someone seems like they’re in trouble I’m going to step in.”

In North Carolina alone, the National Alliance to End Homelessness (NAEH) reports that 9,268 suffer from homelessness on any given night. That includes the 440 in Winston-Salem.

“Homelessness is a very personal issue to me,” Night Watch said. “I have a family member who is homeless. It’s something that I’m very passionate about. I’ve seen how it’s affected other people, not just the person who ends up on the street.”

According to the White House, over 500,000 people go homeless on a single night in the United States. Thirty-five percent of them are found unsheltered on the streets or in locations unsuitable for living. These staggering numbers led Olsen to aid the homeless in his own community and raise nationwide awareness on homelessness.

“I’m just trying to bring awareness to the issue of homelessness,” Night Watch said. “And if I can use this in a way that helps a little, great.”

Night Watch steps in if he suspects any violence toward homeless people during the night. He also keeps watch for those who may seem lost and helps guide them to a shelter or wherever it is they are staying. He always greets them with a friendly smile and tries his best to make sure that they get somewhere safe.

“I try to be approachable, smile and wave at people,” Night Watch said. “I knew what kind of reaction I’d get.”

He says that helping the homeless gives him a nice feeling that nothing else does. Once his bag of donated supplies is empty and he feels there is nothing else he can do, he heads home to rest and prepare for the next day.

“Ninety-five percent of what I’m doing out here is homeless outreach, just handing out stuff in this bag,” Night Watch said. “We have food, clothes, toiletries, whatever they need. The other 5 percent is what I call proactive assistance. I go up to people and see if they need my help.”

Night Watch’s work in his community is more than honorable. Not only is he helping homeless people survive night after night, but he is also raising awareness for the issue. Similar projects are gaining more support from donations and volunteers, promoting the overall wellbeing of the homeless community in Winston-Salem.