Star Wars: ‘The Rise of Skywalker’ receives mixed reviews from fans and critics 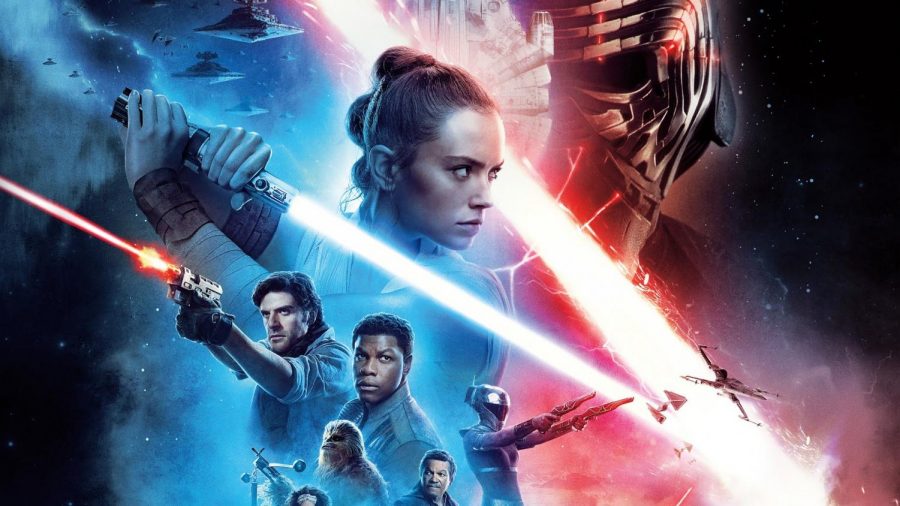 (Spoiler Alert) This past December, Star Wars: ‘The Rise of Skywalker’ was released to theaters to finish the trilogy that began with “The Force Awakens” in 2015. Directed by J.J. Abrams with a budget of $275 million, the film has already brought in $989.6 million worldwide. Soon it will be the seventh Disney movie released in 2019 to make over $1 billion in revenue. As much as the film was a box office hit, there are just as many complaints from fans and critics about the film itself.

A widely shared opinion among fans and critics is that they feel the film was rushed altogether, with action scenes put back to back without any calm scene to slow it down. The heroes bounce around from one minute to the next without a moment to process where they are going or why. When Chewbacca is thought to be dead, he is rescued before viewers are even given the chance to process it. Many details and explanations are forced into the movie too quickly, leaving mass confusion for its audiences behind it. A perfect example of this is the First Order’s search for the traitor among their ranks. General Hux is revealed to be the traitor, only to be eliminated less than five minutes later with a total screen time of two minutes and thirty seconds.

Another one of the primary complaints about “The Rise of Skywalker” is the blatant execution of Rose Tico. (Kelly Marie Tran) She played as a major character in “The Last Jedi” but had a measly one-minute appearance in the 142-minute film.

“We hope Kelly Marie Tran knows that there were so many fans looking forward to seeing Rose in IX,” said Scavenger’s Hoard, a Star Wars podcast. “Where her character would go, whether she’d have developed a friendship with Rey, how she’d have forged a path of leadership in the Resistance. We’re angry and disappointed for her.”

Lucasfilm practically erased her role completely without any explanation. This only encouraged haters and the barrage of hateful comments thrown at Tran for being the first woman of color to be cast as a major character in the Star Wars franchise. Tran was harassed and cyberbullied online after the introduction of her character in “The Last Jedi.” However, many fans are now disappointed in how little time she was given in “The Rise of Skywalker.” Many have expressed their feelings on social media sites including Twitter.

The trailer teased the revival of Emperor Palpatine with his sinister laugh echoing right at the end. His appearance in “The Rise of Skywalker” is hated by some but loved by many. He is brought back as a plot point explaining Rey’s background and ancestry, as she is Palpatine’s granddaughter. Some critics say this was a lazy way to explain her past, but it works nicely as she is able to go against Palpatine’s will and defeat him with Kylo Ren by her side. She theoretically completed her Jedi training once she stood up to her grandfather and refused to join the dark side.

“While the movie had some pacing issues and I would have liked to see some different character development, I thought it was stunning and I’ve seen it multiple times,” said junior Julianne Gryder. “The callbacks to the original and previous films were so fun for any Star Wars fan.”

One of the best things about the film is that it does what the Star Wars franchise is best known for: It ends the trilogy well. The movie leaves off with Rey burying both Luke and Leia Skywalker’s lightsabers in the sand near Luke’s Ranch on Tatooine. After previously using Anakin’s old blue lightsaber as Luke did, Rey made her own golden lightsaber with her old staff crafted into a handle. This ending honors the Skywalker legacy while turning the audience’s gaze towards Rey’s future as a Jedi master. With the First Order defeated, the galaxy can rest at peace knowing that they have hope going into the future.