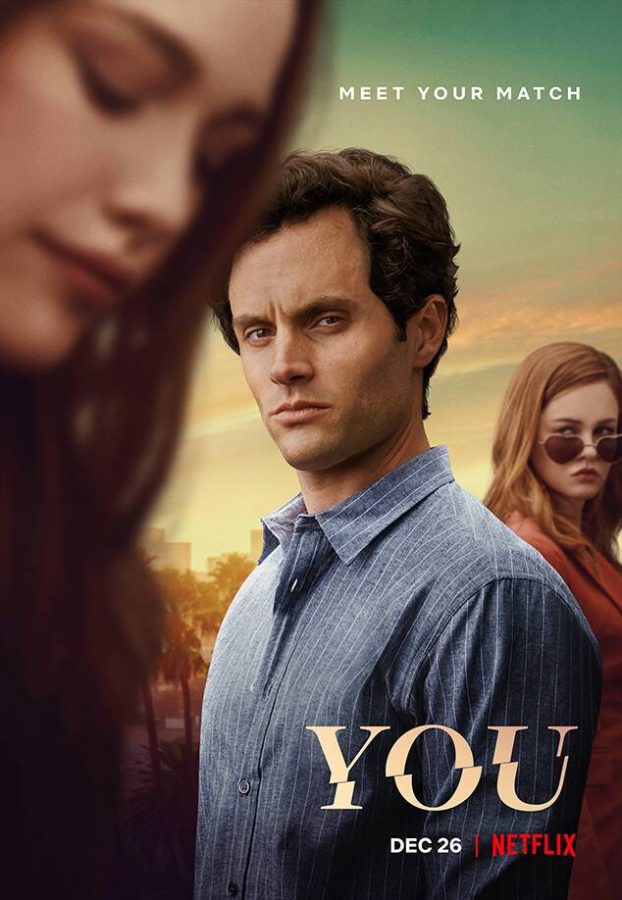 "You" season two was released on Netflix Dec. 26. It immediately enthralled audiences.

The second season of the Netflix original, “You” was released on Dec. 26, 2019. It included ten episodes, each with their own nail-biting and intense plot. The show is based off the book, “You” by Caroline Kepnes.

The basic storyline of the show focuses on Joe Goldberg (Penn Badgley), meeting a girl, beginning to obsess over her and going to extreme measures in order to win her over. Multiple times throughout both seasons, Goldberg takes it too far and is extremely lucky to not get caught.

The second season begins with Goldberg moving from New York to Los Angeles in order to get a fresh start. He finds a job in a bookstore, just as he did in the first season, called Anavrin. Anavrin is connected to a farmers’ market type store, which is where he meets Love Quinn (Victoria Pedretti), his new love interest.

The show follows Goldberg’s inner monologue, where he talks a lot about “not letting this situation go bad,” meaning he was trying to change and not be the same obsessive man he was in season one.

Even though season two is only ten episodes, it is action-packed and suspenseful. Each episode left me on the edge of my seat, causing me to binge watch and finish it in only a few days. This was the case for many viewers.

“Buried within the show, though, is a warning about social interactions in the modern age, and the way people can be manipulated online thanks to the volume of information that’s available,” said CNN reporter Brian Lowry. “In that sense, the series serves as a highly binge-able, very modern thriller, if not, hopefully, what anyone will view as a template for modern romance.”

Badgley does an incredible job playing a stalker while also making the viewers feel some sort of sympathy towards him. For me, if he is close to being caught or something else bad happens to him, I catch myself rooting for him in hopes that he will be okay. Normally watching a psychopath does not make me feel any type of sympathy for him, but in this case, I do.

In my opinion, the second season is much better than the first because of Joe’s character development, the new characters in season two, and the overall plot. Joe is not the only crazy person in season two which makes every episode a million times more suspenseful and interesting.

“My favorite part about the show is the suspense in what Joe is going to do and what is going to happen to him, like if he will get caught or not,” said senior Emily Hatcher. “I like season two more because it had more plot twists and suspense than the first season.”

Overall, “You” is one of my favorite shows to watch because of the way it keeps you entertained throughout every minute. It easily gets a ten out of ten from me, but I would not recommend watching it if you are easily scared. It makes you wonder; who is watching me?