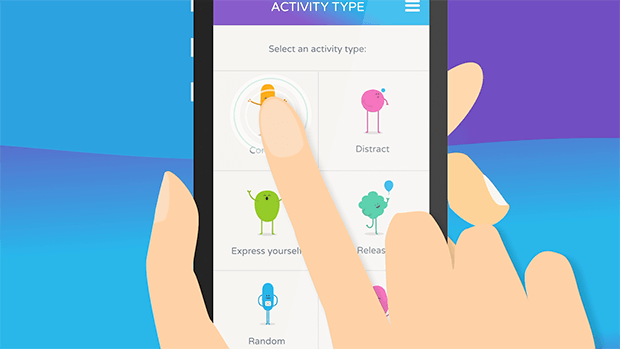 The Calm Harm app is a new award-winning innovation now available on the App Store. It is designed to help resist or manage self-harm. The free app was launched in 2016 and then  released on Dec. 10, 2017 and has recently exploded in popularity as self harm rates have increased. It has also been included in a list for the top 25 therapy apps for mental health this year.

A survey taken in 2018 says that one in four teenage girls commit self-harm, and approximately two million cases are reported annually in the U.S.  The app is not meant to be a substitute for professional help. It was created in the UK by Nihara Krouse, a Consultant Clinical Psychologist. It is aimed towards a teenage audience but is rated E for everyone.

“About 90 percent of people who engage in self-harm began in their teenage years, and the focus of the charity is early intervention,” Krouse said.

The app includes 5-15 minute sessions including six different types of activities. The activities include comfort, distract, express yourself, release, random and breathe. These activities are pro-social and pro-self, and are meant to try and avert users from self-harm or self-mutilation. It has earned a 4.1 star rating on the App Store with over 100,000 downloads.

The “Breathe” category on the app tells the user to inhale and exhale for certain amounts of time. This activity lowers blood pressure and heart rate, inducing a relaxed and calm state. “Distract” offers different challenges for the user, such as naming as many singers as they can in 60 seconds or thinking up a name for every letter of the alphabet. This is meant to distract the user and get them thinking about other things rather than self-harm.

“This is an amazing app, and honestly one of the most thoughtful things I’ve seen in a long time. It makes me so happy that there are people dedicating their time to building something free that will help so many people. A massive thank you to the app’s creators, you’re fighting the good fight, thank you so much,” said an anonymous user.

The website Tumblr raised awareness about the app as users shared the app’s link and shared their uplifting stories about how it has helped their lives in turning away from self-harm.

“Just wanted to let you guys know that there’s an app called Calm Harm that helps you resist the urge to self-harm,” said an anonymous Tumblr user.

Users can create a personal list to remind themselves who they know to call when they need support from trusted friends and adults. Users could also customize their own personal mascot too. The app also lists resources, websites and hotlines to help teenagers resist the urge to harm themselves. It is protected by a password the user enters themselves to keep their activities  private.

“I really liked the design and function of the app, and it was intuitive to use,” said Erika Penney, a clinical psychologist. “I particularly liked that it is interactively designed to walk a user through the decision making process about using alternative skills, rather than just offering information. I like that users can tailor the app to list only activities/skills they find helpful and hide activities they don’t like.”

Krouse designed the app by utilizing Dialectic Behavior Therapy (DBT). DBT is an evidence based psychotherapy that was invented to treat borderline personality disorder. It is now used to help treat mood disorders, suicidal ideation, and for change in behavioral patterns such as self harm or substance abuse. DBT on the app is a type of talking therapy that’s supposed to help with people who have mood disorders.

Complaints about the app consists of users and psychologists being concerned that it solely distracts users from self-harming rather than motivating them not to do it in the future. It is designed to take their mind off of it in the moment. Psychologists say it would be more beneficial if it included methods that help prevent self-harm. Either way, users can benefit by utilizing the app to “ride the wave” of the urge to self harm.

Self-harm or self-mutilation is a developing problem in the United States. Proper treatment is never received or asked for, and many teenagers begin self-harming around the age of 14. This sometimes carries on to their 20s. Raising awareness is an important component, and Calm Harm helps aid this growing issue. Self-harm and depression should never go ignored or untreated, so the app is available to help users keep up the good fight against it.