It’s official: Sequels can be better 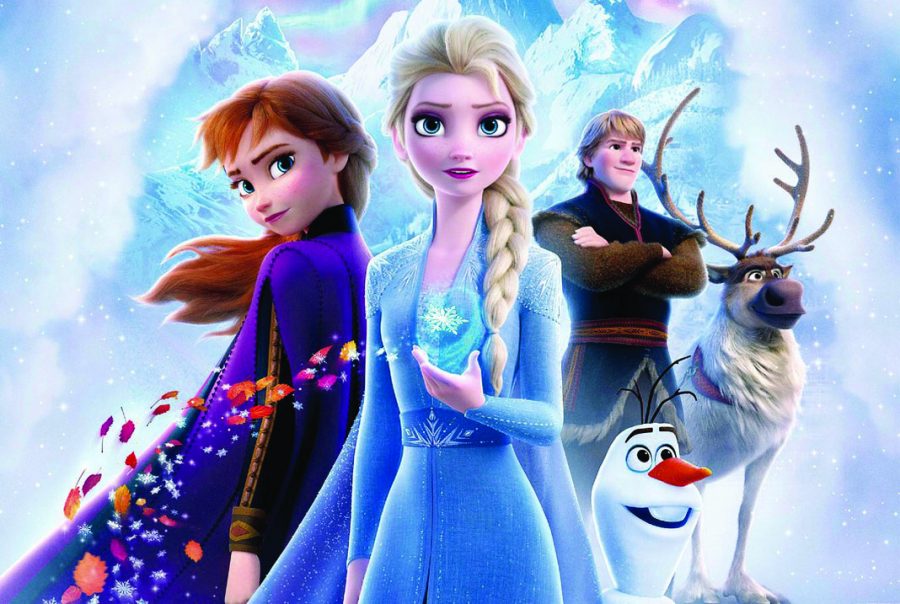 “Frozen II” was released Nov. 22, 2019 and was quite a big step away from the original. The characters developed, the songs improved and the plot thickened immensely.

“Frozen II” received a 76 percent rating on Rotten Tomatoes and a 7.3/10 on IMDb. It has a running time of one hour and 43 minutes.

The movie begins with Anna (Kristen Bell) and Elsa (Idina Menzel) as children playing in the snow Elsa created with her powers. It then moves on to their parents telling them a story about an enchanted forest north of their village, which outlines the plot of the whole movie.

The plot is much more intense than the original “Frozen,” and has many more obstacles for the protagonists to face. They have to battle fire, water, wind and earth in order to continue their journey.

Olaf, the small snowman Elsa creates in the original film, has a much larger part in “Frozen II” and has many memorable moments. Kristoff and Sven also come back in the sequel to bring more laughs and happy scenes.

In the first film, Anna spends the film embarking on a journey to save her village and her sister after Elsa flees Arendelle. Just like every Disney movie, there is a happy ending and all the characters become closer.

“Frozen II,” however, has a much more complex plot and is seen by many as darker than the first movie.

“Sometimes we forget, if you go back to old, traditional fairy tales, they always have a moment that gets a little scary,” “Frozen” writer and producer Jennifer Lee said. “And that’s part of what fairy tales are for. There’s so that you as a child and as a person in your life can experience things and you’re safely in the seat.”

There has been controversy over whether or not the film is as appropriate for young children as the original was. “Frozen II” definitely entered a new realm that was darker and much more serious than its predecessor.

The characters face a number of internal struggles as well as frightening battles with other creatures or people. These aspects of the movie have made some lovers of the original “Frozen” less enthusiastic about the sequel.

“It was just a little depressing,” said junior Hannah Boyte. “I liked the first one more because it wasn’t so dark and sad.”

While some people did not care for the darkness of the sequel, others thought it was a major improvement.

“The more serious themes of the sequel definitely added to the story,” said junior Sarah Baringer. “It teaches a valuable lesson to the young kids watching it that sometimes you need to put others first in order to do what’s right.”

“Frozen II” is a movie that can capture many different age group’s attention. It has relatable and appealing content for everyone watching: a love story, internal struggles, the importance of family and a decent amount of comedic relief.

The sequel also had a whole new soundtrack. With “Let It Go” from “Frozen” being the most streamed song from the modern Disney era, the music of the sequel had a lot to live up to.

“It seemed to me to be more sophisticated and with less intention to be catchy,” said former Reagan student Hannah Boone. “I personally like it a lot more. There’s even a riff that comes into play in multiple songs, which I thought was a really cool way to bring continuity into the film.”

And of course, what’s a Disney movie without the magic? “Frozen II” had not only Elsa’s magical powers, but many others incorporated into the plot. This made it an even more exciting film to watch.

The sequel without a doubt trumped the original “Frozen” for me. The characters were better, the sisterly love between Anna and Elsa was a much more important part and the plot was much more entertaining and engaging.

Even being a kid-friendly Disney movie, “Frozen II” managed to hit a lot of modern themes. A main character went through a time of immense grief, showing children that even Disney princesses are not happy all the time. Both the original and the sequel are focused on independence and how romantic love is not the most important kind, which are also vital lessons for children to learn.

Overall, “Frozen II” provided principal life lessons for children baked into a very appealing and thrilling film that kept viewers on the edge of their seats. Will there be a “Frozen III”? One can only hope.