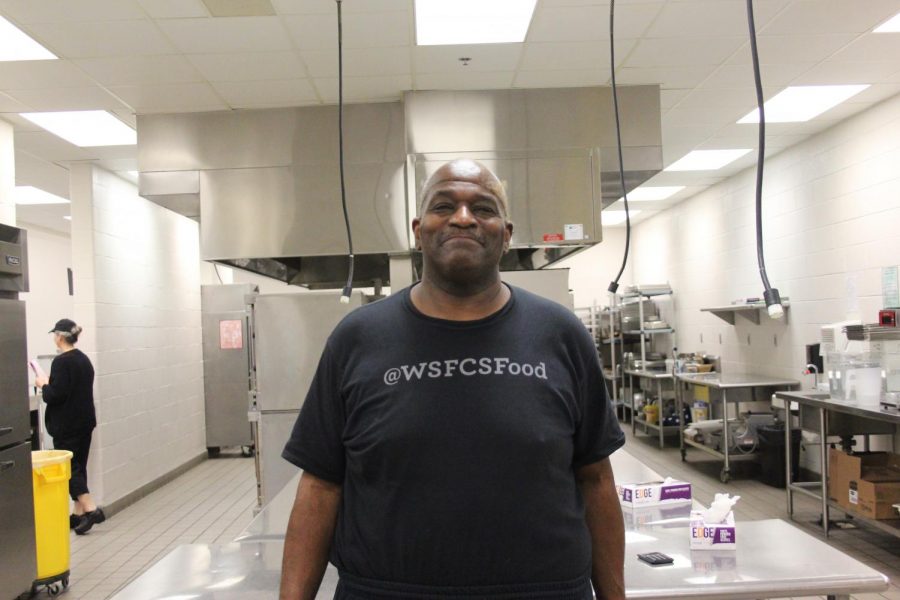 Paul Hart has worked as a cook in the cafeteria at Reagan since it first opened in 2005. After working 14 years he is retiring on Jan. 1, 2020. Paul first began working with his twin brother, Sylas Hart. Paul’s brother left the job years earlier. Paul gets up every morning at 5 a.m. to be at school by 7. His routine will be completely changed once he gets to work full time as a pastor at his church, Pilgrim Rest Baptist Church.

“When I came here in 2005, that’s when I started pastoring my church. It was the same year. I just celebrated my 14 year anniversary. Never did I know I’d be retiring after 14 years here at Reagan.” Paul said.

Paul said he has never grown tired of the job and isn’t leaving because he wants to. He refuses to cut corners in his job and brings his best effort every day no matter what. The chefs have strict recipes to follow, and he pays attention to every detail. The lunches at Reagan aren’t just frozen and reheated but made fresh every day following stern food safety regulations. The job has made him more detail-oriented, and he makes sure to never make a mistake.

“I came here as a cook, but this job has made me a better person,” Paul said.

Working at Reagan has changed him over the years. He met many of his closest friends here as well as his wife, Becky Bolinger. She was one of the four managers he’s had over the course of 14 years, and they got married in 2017. Two of his best friends are Eric Rader and Chris Pinnix, both social studies teachers. Pinnix attends his church. Paul doesn’t want to leave, as they’ve made a significant impact on his life. He’s made many close friends and has gotten to know thousands of students.  The Reagan staff and students are what he’s going to miss the most. Teresa Pack is one of Paul’s closest friends in the kitchen, having worked with her for many years.

“I’ve known him for about nine years. He’s a great person to work with and he’s just a great person to talk to. A lot of us are sad to see him go but I know he has to leave. I wish him all the best.” Pack said.

Paul keeps in touch with graduated students through his church email. He sends out an email every morning to a group containing over 100 people, some being students he has served in the past. These former students are all grown and married. All the things his job has brought about have become an essential part of his life. He says it’s more than just a job. To him, it’s a passion. He also says working at Reagan isn’t just a job but a lifestyle.

“Reagan is the best school in the world, and it has the best students,” Paul said.

Paul says he could never transfer to any other school because of the standards that the Reagan students have set. He says that over the 14 years he’s worked in the cafeteria, he’s only seen three fights. It isn’t like any other school because once students enter Reagan they follow the same standard that everyone else sets. He appreciates the students and what they do for the school more than anything. He says Reagan wouldn’t be what it’s widely known for if it weren’t for its dedicated and hardworking students.

Many students have been left touched by Paul’s kindness and passion for his job. He believes every student at Reagan is beautiful in the way they act toward him and everyone else.  He believes he has the same connection with the students as any of the teachers do, and that he can relate and talk to students like they were his friends. He is frequently asked by students and staff if he is going to come back and visit sometime in the future.

“How can I not come back? I’m going to miss everybody.” Paul said.

The school will be saying goodbye to one of its most loyal and hardworking staff members. Paul has stuck with the school since it has first opened and will never forget the memories he’s shared with the people in it. Students, teachers and the rest of the staff are going to miss him as much as he will miss the school. Countless people say he is the kindest worker they’ve ever met at Reagan. His retirement will not affect his determination to keep his compassionate reputation. He has made a lasting impact on the teachers and students, and they have left an emotional impact on him as well. He has changed drastically over the years and can never go back to the way he used to be.

“Reagan has become a part of me and I’m going to miss it,” Paul said.