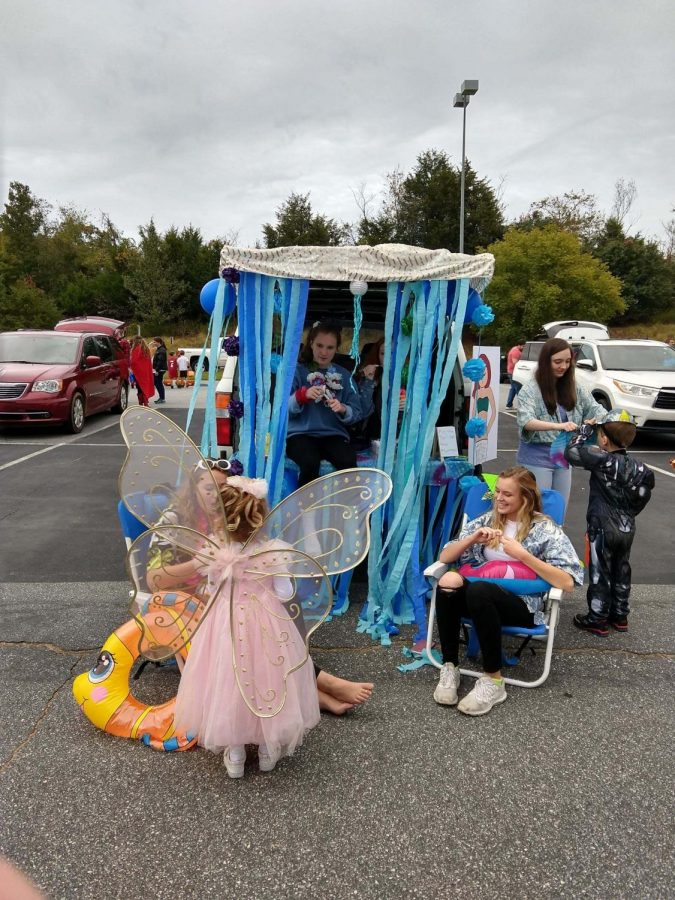 Each year Reagan hosts a Trunk-or-Treat for children in the surrounding area. This tradition is supported by many of the school’s sports teams and clubs, all bringing multiple decorated cars filled with candy. One way Reagan is able to give back to the community by making Pffaftown’s Halloween a little sweeter. This year’s Trunk-or-Treat was held on Oct. 19 from 5 to 7 p.m. and was free to participate. Hundreds of Trick-or-Treaters come through every year within those short two hours.

Trunk-or-Treat at Reagan was brought about three or four years ago by Amber Bryant, former Reagan teacher, and Sarah Smith, math teacher, and Spirit Club sponsor.

“We wanted to do it because we’d always thought of Reagan as a community school and it was a way to show the community appreciation for all the support they give the school,” Smith said. “RHS has been a service-minded school since the beginning and this way, no matter what team, club or organization they belong to, they serve together.”

Some of the clubs sponsoring this event are Spirit Club, Student Government, the Football team, and many more. Around 25 clubs and sports teams provided a trunk and there were around 50 to 60 volunteers in total. Each club picks its theme and decorates it accordingly. Student Government, for instance, chose the Avengers theme and dressed in superhero costumes. Spirit Club’s theme was Disney, and members of Students Against Destructive Decisions (SADD) dressed up as old ladies and decorated their trunk with stuffed cats. Some clubs even set up games to engage the kids even further rather than just saying “Trick or Treat.” Care Club had several games set up including Witch’s Ring-Toss and Pumpkin Bowling.

Trunks and games were not the only sources of entertainment at this event. Short hayrides pulled by a tractor were available for free. It was an opportunity to cool off after running around in a stuffy costume.

Not only were there hundreds of Trick-or-Treaters at this event, but some attendees also brought their dolled-up dogs with them. Some were dressed up and others were there solely to get attention. Luckily for them, some volunteers had dog treats on their person, so it wasn’t just the children that got to experience a tasty treat that night.

Around 5:30 that afternoon it drizzled a bit. If it would start to rain, the festivities would have been moved inside. Thankfully, the slight drizzle ceased and the Trunk-or-Treat was able to carry on without any issues.

“This event gives the community the chance to come together to spend a fun family evening together, dress up in great costumes, enjoy a hayride, and Trick or Treat safely. It is also a great way to show the community the creativity and kindness of our students as well as the many different opportunities at Reagan so that future Raiders will have a lot to be excited about!” Smith said.