Opportunities available for students to help victims of Florence and Michael. 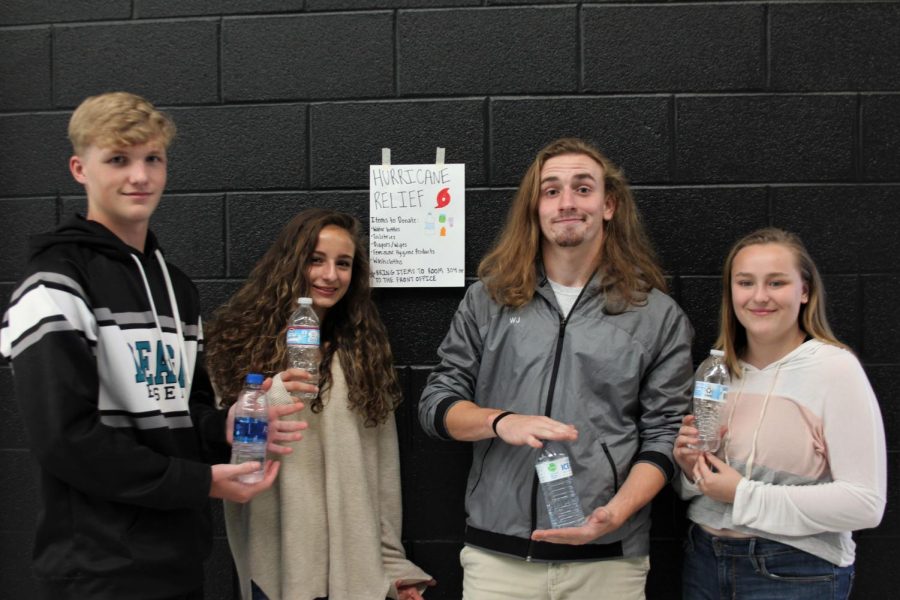 Students at Reagan go above and beyond to help victims. They collected water bottles and other toiletries needed.

“A hurricane is one of those things you never really think about until it happens, and when it does, you just have to make sure you bring support to the victims as well as any materials they might need,” Earth and Environmental teacher Lori Heath said.

Hurricane Florence and Michael have intensely impacted the East coast in many ways. Septic systems and sewages were heavily affected by the rain and flooding from Hurricane Florence. Toxic pollution, mostly coal ash and waste, was carried to the coast and affected all communities near the coast.

“The power outage affected almost all the lights in my house and the overall mood of my family,” junior Austin Cook said. “We became irritated by everything, especially having to throw out most of our refrigerated food and eating only protein bars for the majority of the outage.”

Michael arrived in Winston Salem unexpectedly and hit certain schools and communities hard. West Forsyth High School was one of the most affected in the WSFCS school district, as it lost power and flooded in several areas of the school.

“The lights flickered a few times during the school day but never went out completely while we were there,” West Forsyth sophomore Banks Cox said. “Our breezeway was flooded like crazy and there were puddles in some places in the school.”

“The power went out on Thursday when Michael hit us the hardest,” Tabor sophomore Maggie Hynek said. “Lots of people also couldn’t get home because a tree fell behind Tabor, blocking the road.”

Many clubs at Reagan have held drives to help the victims of Hurricanes Florence and Michael. Canned food, toiletries, water bottles, and other essential items have been donated to the areas affected.

“After a flood, you typically have mold form, and you have major cleanup to do, so cleaning supplies like paper towels and other general supplies were important to collect, as well as water bottles,” AP Environmental Science teacher Stephanie Pearson said.

Teachers at Reagan have also offered extra credit opportunities to their students that bring in items for those affected by the hurricanes.

“My students had to bring in two items for our drive, and if they did they got five points on their lowest quiz grade,” English teacher Shannon Overby said.

Many trees and branches have fallen due to the strong winds Hurricane Michael brought towards Forsyth County. Many roads were also closed or put under construction due to debris caused by these fallen trees.

“There is now a huge hole in my backyard from where my creek expanded,” sophomore Georgia Robbins said. “The creek also took out parts of my fence.”

Flooding has caused major destruction in people’s homes. Students that live at the bottom of hills or near floodplains were extremely affected.

“My power went out for almost three days, and I couldn’t do anything,” freshman Chase Winslow said. “My water wasn’t working and I had to go to someone else’s house to shower,”

Overall, Hurricanes Florence and Michael caused damage and trauma for many people throughout the East Coast. Students at Reagan as well as throughout the rest of the county can contribute to hurricane relief and try their best to help all that were affected.